Chinese Coronavirus has landed in the U.S.

Coronavirus in the U.S.

The Centers for Disease Control and Prevention (CDC) revealed Tuesday that a patient returning to Washington state from Wuhan, China, where an outbreak of coronavirus is taking place, was diagnosed with coronavirus. The outbreak has caused hundreds of illnesses and 17 deaths in China.  The numbers continue to go up.  Nearly 300 people have been infected, 51 in severe condition, 12 in critical condition.

Now, there has been a 2nd U.S. case  of the Chinese coronavirus –– a woman in her 60s from Chicago who has traveled to Wuhan, China. She’s doing well and in stable condition. She’s in isolation in the hospital primarily for concern about “spread”. The immediate risk to the general public is low at this time. There are 63 cases being monitored in the U.S. that stretch across 22 states, including the first patient in Washington state and the new case in Illinois, said Dr. Nancy Messonnier, director of the National Center for Immunization and Respiratory Diseases.

The outbreak is caused by a novel coronavirus, meaning it doesn’t  have a name yet and that has never been encountered before.  It’s from the family called “the coronaviruses”, such as  Severe acute respiratory syndrome (Sars) and Middle Eastern respiratory syndrome (Mers .  The symptoms of the disease are pretty mundane; a dry cough, fever, and then breathing problems. In the most severe cases, people have gone on to develop viral pneumonia. In some  cases there can be organ failure. As this is viral pneumonia, antibiotics are of no use. The antiviral drugs we have against flu will not work. If people are admitted to hospital, they may get support for their lungs and other organs as well as fluids. Recovery will depend on the strength of their immune system. Unlike flu, there is no vaccine for the new coronavirus, which means it is more difficult for vulnerable members of the population – elderly people or those with existing respiratory or immune problems – to protect themselves.

Where have cases been confirmed so far?

This brand new corona virus came from animals. It’s believed that the source was a seafood market, which also sold live and newly slaughtered animals. New and troubling viruses usually originate in animal hosts. Ebola and flu are examples. So far, as far as we know, all the cases have come out of Wuhan. So, some of these people who got it in Wuhan have then traveled to places like Thailand, Japan Hong Kong, Macau, Japan, Nepal, Singapore, South Korea, Taiwan, Thailand, the US, and Vietnam. 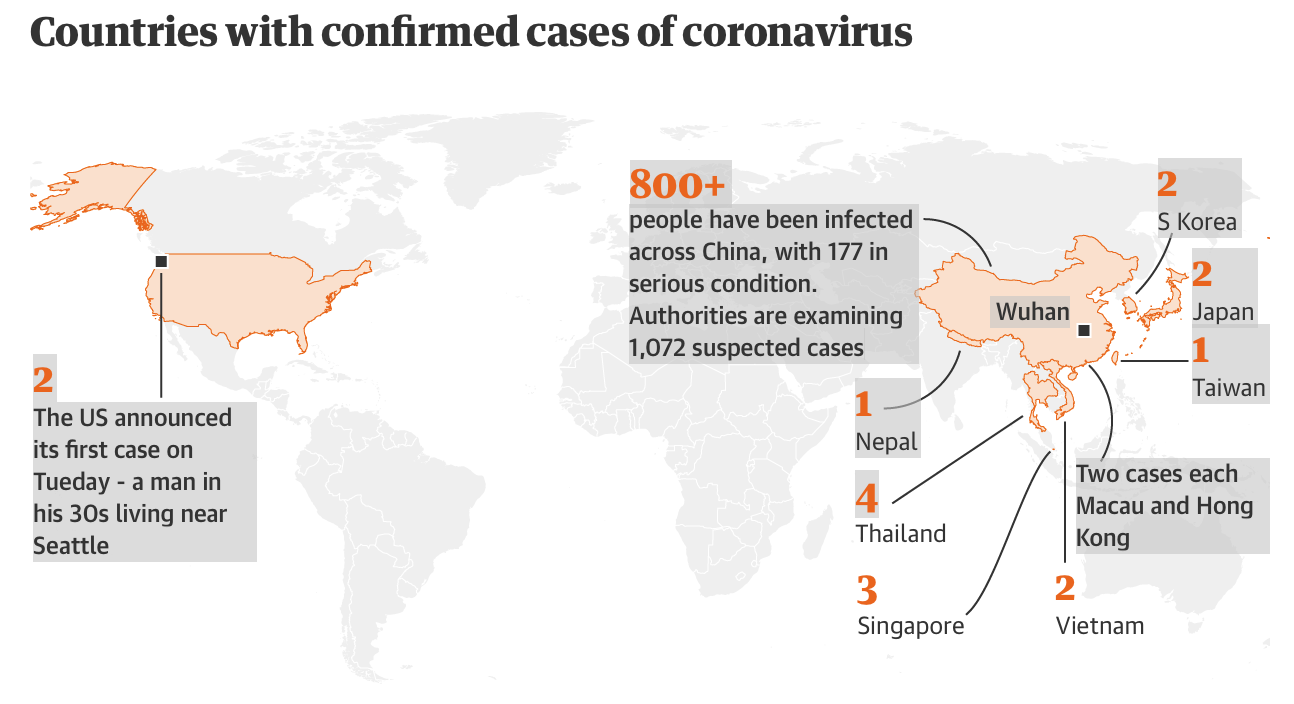 Should I be panicking about this outbreak?

Most people hospitalized in China are over 40 and the youngest person is about 13 years old. The virus doesn’t appear to be affecting small children. Those who’ve died had an underlying conditions, as they say: They are frail; they may have heart decease or cancer already. So, their immune system is not very robust.  The question is: Is it somethings that is  spreading from  animals to humans, as it seemed to be the case in Central China,  or is it something that is spreading from human to human? The bad new is that this coronavirus is transmitted from one person to another.

What treatment is available?

There isn’t any treatment at the moment. This is a virus — antibiotics won’t work. None of the flu drugs available will work with this novel coronavirus. The CDC is trying to speed up testing and to get the tests in the hands of state health officials. It currently takes the CDC about four to six hours to make a diagnosis once a sample makes it to its lab. On Thursday, the World Health Organization declined to formally designate the new virus as a global health emergency, after postponing its decision the day before. Health officials are trying to contain the fast-spreading illness without unnecessarily spooking global trade. WHO physicians said they needed more data before declaring a global emergency, but the virus is now spreading through close human contact and in health-care settings, they said.

Current studies at NIAID-funded institutions and by scientists in NIAID (NATIONAL INSTITUTE OF ALLERGY AND INFECTIOUS DISEASES) laboratories include efforts that build on previous work on SARS- and MERS-CoVs. [coronaviruses]

They indicate that a candidate vaccine for 2019-nCoV could be ready for early-stage human testing in as little as three months as compared to 20 months for early-stage development of an investigational SARS vaccine. The authors conclude that, “the emergence of yet another outbreak of human disease caused by a pathogen from a viral family formerly thought to be relatively benign underscores the perpetual challenge of emerging infectious diseases and the importance of sustained preparedness.”

Be  vigilant about washing hands regularly and cautious about touching your face and possibly infected surfaces.