Over the past several weeks, even before the Taliban’s blitzkrieg on Kabul, videos have emerged showing militants inspecting spoils of war, including US-made weapons seized from the Afghan National Army (ANA). The ANA completely collapsed as the US-led coalition began to accelerate its withdrawal, with some units surrendering without a fight, and handing their weapons and equipment over to the militant group.

According to some estimates, the Taliban may now be in possession of more than 2,000 US Humvees and other armored vehicles, and as many as 40 aircraft – including Black Hawks, scout attack helicopters, and military drones. It may also take advantage of the vast arsenal of 600,000 M16 assault rifles and other infantry weapons, some 162,000 pieces of communications equipment and 16,000 night-vision goggles, gifted by the Pentagon to Afghan forces since 2003.

The Taliban has reportedly seized US military biometrics equipment that could expose Afghans who helped coalition forces – since they contain identifying data like iris scans and fingerprints as well as biographical information.

They told the news outlet that the portable devices could be used to access sensitive information from large, centralized military databases, but noted that it was still unclear how much of the biometric database collected on the Afghan population has been compromised.

According to a US Army Corps of Engineers presentation, HIIDE devices use the data collected to create a “portfolio”that can then be imported into Biometrics Automated Toolset (BAT) identification-processing software as a “digital dossier.” This can be scanned against official watch lists for threats.

Besides tracking insurgents, the Pentagon was also reportedly keen to use the devices to gather unique data on 80% of the Afghan population to check for terrorist and criminal activity. Unnamed sources said biometric details of locals who helped the US were also collected and used in identification cards.

“We processed thousands of locals a day, had to ID, sweep for suicide vests, weapons, intel gathering, etc. … [HIIDE] was used as a biometric ID tool to help ID locals working for the coalition,” an American military contractor told the outlet.

In addition to scanning biometric information from Afghans assisting US military forces, data from locals who were helping with diplomatic efforts was reportedly collected as well.

The International Rescue Committee estimates that over 300,000 Afghan civilians were involved with the American mission over the past two decades.

An unidentified US Army Special Operations source told The Intercept that the Taliban “does not have the gear to use the data” but warned that Pakistan’s Inter-Services Intelligence spy agency had the additional equipment required to process the data from HIIDE devices.

Neither the US Defense Intelligence Agency nor the Office of the Secretary of Defense has commented on the issue as of writing.

“I don’t think anyone ever thought about data privacy or what to do in the event the [HIIDE] system fell into the wrong hands,” Welton Chang, chief technology officer for Human Rights First (HRF) and a former Army intelligence officer, told the outlet. 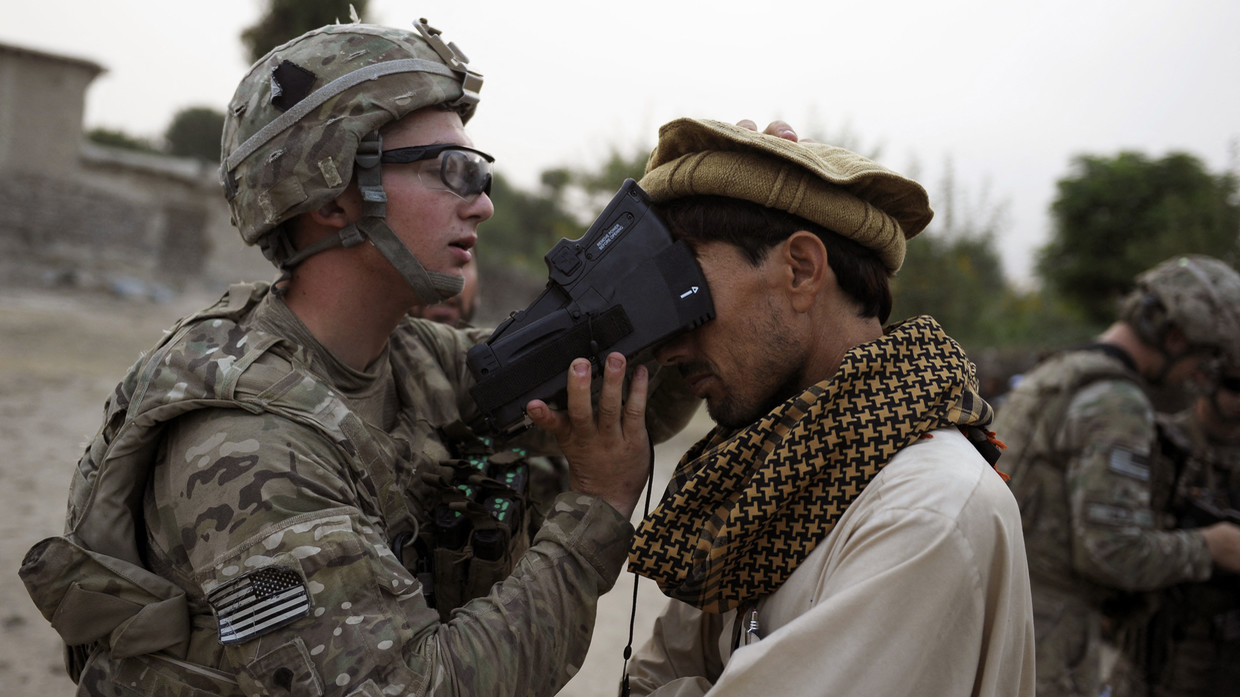 As the Taliban advanced into Kabul, Afghan civilians who worked with the US were reportedly caught in a potentially life-or-death predicament over whether to save documents proving their assistance – considered crucial to acquiring a visa out of the country – or destroy them.

According to a Wired magazine report, the Taliban is apparently conducting door-to-door searches to find those who have worked with foreign governments and non-governmental organizations (NGOs).

In 2016, the group reportedly killed 12 passengers on a bus they intercepted after fingerprint scans on a biometric machine identified them as security force workers. An Afghan forces commander confirmed the use of the device – which could “identify security force members from amongst civilians” – to local news outlet TOLOnews at the time.

Biden meanwhile pushed back against critics of the withdrawal, blaming Afghanistan’s leaders and military for failing to stand up to the Taliban, and insisting that the US military did all it could for Afghanistan during its nearly 20-year occupation of the country.